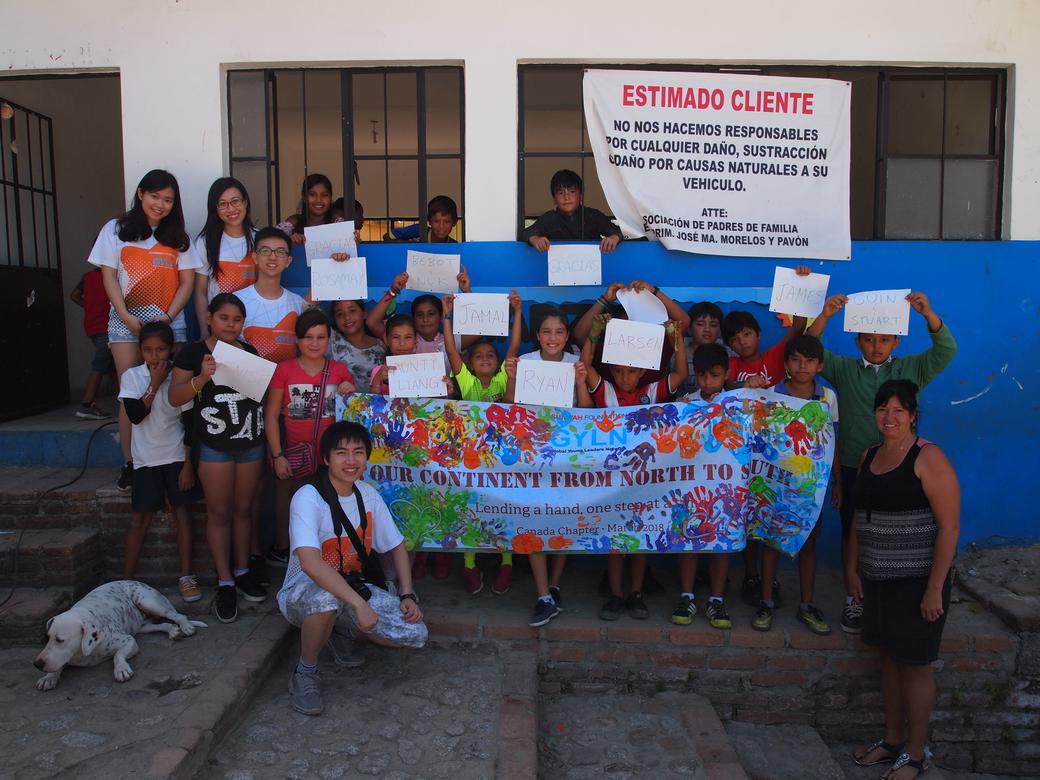 From March 21st to 27th 2018, our Canada Chapter has collaborated with the Boca de Tomatlan School in Mexico to provide a healthy learning environment for the underprivileged students. We have transformed an unused storage facility into a library by renovating the entire room with new painted walls, desks and bookshelves, and brought over 200 interactive books, feature-rich laptops, and abundant school supplies.

Our chapter had been brainstorming ideas on how we could support underprivileged children and communities. In November 2017, we made some connections with the founder of a well-established Canadian non-profit organization for children and youth around the world, named Isa Mundo (http://isamundo.org/). This organization has been supporting schools and communities in developing countries for more than 10 years and partnering with Canadian scouts group, Engineers Without Borders, Rotary International, etc. We – members of the GYLN Canada Chapter – were very much interested in assisting some of its projects in Mexico supporting schools in teaching, reconstruction, cultural sharing event. After discussions and with Sunwah Foundation’s sponsorship, this would be a great opportunity for us to extend the scope of helping local communities in Mexico, where resources were relatively less abundant than in Canada.

We were very glad that the Founder of Isa Mundo, Mr Paul Lorilla was willing to guide us. His experience in working with school education projects and communicating with local people has provided us a lot of learning opportunities. He suggested that the Boca de Tomatlan school in Puerto Vallarta – the only school in that area – needed a lot of resources and reconstruction for the establishment of a library. This was for the children to enhance their English literacy and explore the world through books. Thus, we decided to take this project and focus on interacting with the students so as to set up a library for the Boca school. We named it “Our Continent from North to South”, with a slogan of “Lending a hand, one step at a time” aiming at uniting people around us and helping the communities. The project has been carried out from March 21st to 27th, 2018.

The initial preparation of this project was not easy. We had quite a few meetings and email discussions with Paul and Cynthia for 2 months for planning the materials we needed for the library, as well as calculating the budget and organizing our accommodation and transportation. We also went around Vancouver City to gather children’s English books and school supplies together with refurbished laptops from Isa Mundo for the school. When we checked-in at the airport, we had four large luggage pieces full of donated materials which exceeded the weight limit allowed. So we had to take out some of the books. In the end, we managed to bring more than 200 books and hundreds of school supplies. Upon arriving at the school, we first went to see the room planned to be the library. Many essential items of a library such as adequate number of tables, bookshelves, books, fans, etc. were missing. Some of the chairs were also broken and woodchips were sticking out that could potentially hurt the passers-by. We also noticed that the lights were cracked, and the windows were not secured. The door was unable to close as it was not properly built. As we planned to bring laptops into this environment, one of our first tasks was to ensure that this room could be secured. There would be a lot of work to renovate this area but we believed that this time we could at least achieve part of it.

Then we started moving the materials we purchased, and built the security cabinet for the laptops. It took quite a long time to do it. One book shelf was prepared and we put the books we brought on. Then, we installed the tables we bought, the laptops we prepared and the chairs for the children in the library. Sunwah GYLN Canada Chapter members were setting up tables, chairs and laptops for the library

We were very glad to have chances to interact with the children and it was a heart-warming experience. We visited the elementary students first, introducing ourselves and showing them pictures of us in Canada – where we were from. The children were excited and listened attentively to our stories. Most of the children could communicate in English with limited vocabulary. We then separated them into groups for playing interactive games and teaching them some English words. We also got to know some of them at a closer level. Additionally, we met the secondary school students who just learnt the concept of time in English and we played the game “What time is it, Mr Wolf?” to reinforce the words. We made hand-prints on the banner

After arranging most of the books and laptops in the library, the children were very excited. They came in to read the books and try to use the computers. After the work in Boca, we also visited Casa Connor (Pasitos de Luz, http://www.pasitosdeluz.org/) – a non-profit child-care center for disabled children from low-income families in Puerto Vallarta, Mexico. The children often suffered from acute physical and psychological illnesses and many were unable to access to the mainstream education system. The conditions of some children were quite severe that they could not move or eat by themselves. However, they were happy to see visitors and liked to take pictures. We talked to them and helped feeding them at lunch. The staff there also gave us a tour around the center and discussed what needs to be improved. On behalf of GYLN Canada Chapter, we also made donations to Dasitos de Luz Child Sponsorship Fund for the children’s food and clothes. All project participants together with the center’s staff and children

After this trip, we realized that our assistance could make a big difference to the schools and local communities. However, that was not enough. The library still needs more books and laptops as the school has about 100 children who would like to use the resources. We visited only one class and the laptops were not enough for the children. The library now contains valuable laptops and needs to be secured. Cynthia has been a volunteer for the school and she wishes that the school would be able to hire a part-time Spanish teacher to lead and manage the school program on their own. There is many more works that can be done to provide support for  the children so that they can continue with their educational goals.

Under Sunwah Foundation’s sponsorship, this was our first project in Mexico and we would like to thank Isa Mundo for the collaboration and guidance on this. The partnership went very well and we believe that we can continue to work together in the future to serve the communities better.