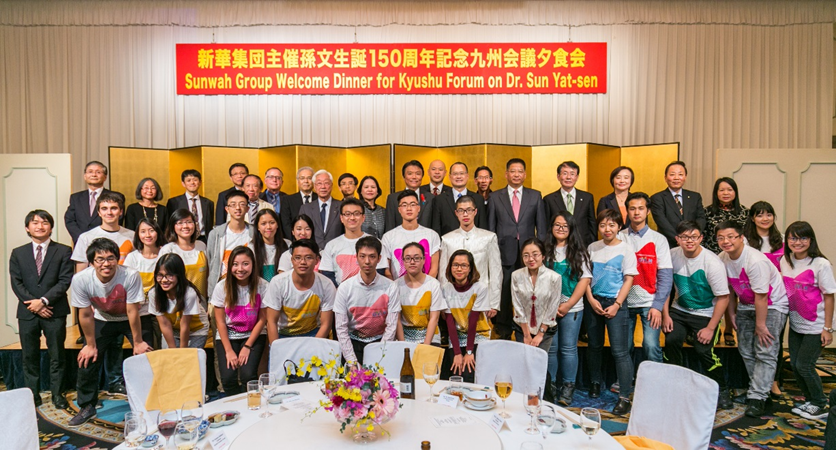 While people in many countries were busy with “trick-or-treat” during Halloween, four members from Japan (Tokyo) Chapter, Tomo, Taiki, Peace, and I, participated in the Kyushu International Gathering trip 2016. It was the very first gathering to be held in Japan, and we were excited to have all of the chapter members flying all the way from their countries to ours. Unfortunately, most of the members were not familiar with the region, so it would not be as successful as it was without Sunwah Foundation and the generous dedication of Kyushu chapter. In this regard, I would like to also thank Ms. Betty Chan, Executive Director of Sunwah Foundation, and all the staff of Sunwah Foundation for organizing such an event and especially Dr. Choi for always giving us enormous opportunities to go beyond our comfort zone. Here, I would like to tell you about the trip and what I learnt from the trip by comparing this conference with the previous one in Hanoi.

On Oct. 29th, most of the members arrived at the Fukuoka International Airport. On the first day of this gathering, members went to one of the famous shrines in the region, Dazaifu Tenmangu. Then, they went to a museum to see how Fukuoka prospered over the years. At night, they went to the city for a little sightseeing. Unfortunately, I was not able to join them for this eventful day, but when I got to the dorm very late at night I could see that members had already been getting so close to each other.

Oct. 30th was the day full of discussions on future leaders. In the beginning, five chapters gave presentations about what they have done in the past year. The scheduled speakers were three, but Angel from Macau Chapter and I felt the need to also explain what we had done, so just 9 hours before the presentation, we had decided to prepare ours as well. I guess you could imagine how much coffee we needed to drink in the next morning. The following morning session started with Ms Betty Chan’s introduction. As always her style is “short and sharp”, it did not take long before the baton was passed to the members to start presentations. All of the chapters were well prepared; especially members of the Hanoi Chapter and Ho Chi Minh Chapter were great in a way that other chapters had so much to learn from their well structured and organized model. Later, we discussed about “Global Citizenship”. How can we be one? The conclusion we had was to understand other cultures and nationalities, while keep your own intact and well complimented. This was a challenging topic because at the end we realized it took time to accept and understand others especially if you were in the environment where everyone else had different background and values. Thus, we had a lecture by Prof. Gordon Houlden, a former Canadian diplomat in Beijing and current professor of University of Alberta, Canada. He shared his experience living in Asia and how he became one of the Global Citizens. There was a lot to learn, and also some challenging questions were asked from the floor. After that, we had the Welcome Dinner with the governor of Fukuoka together with many more leaders from different fields. On Oct. 31st, we had a ceremony at Kyushu University and a memorial conference about Dr. Sun Yat-Sen, the well-known Chinese revolutionary as well as the first President of the Republic of China. We celebrated the ground breaking ceremony of the Jonathan KS Choi Cultural Center located in Ito Campus, Kyushu University. Then, various scholars around the world gathered to discuss about Dr. Sun Yat-Sen. I was amazed to learn how much influence he had, not only in China and Japan, but also in other Asian countries and all over the world.

On Nov. 1st, we had another conference to commemorate Dr Sun Yat-sen’s 150th anniversary of birthday in the city of Fukuoka which is “Conference on Kyushu as a Frontier of Asia Pacific Cooperation”. In the afternoon, we had some free time to go sightseeing, so we went to the Fukuoka city museum and it was already time to say goodbye. This was my second time to join Sunwah Foundation’s international gathering as a member of Japan Chapter and this time it was my great honor to welcome members from other chapters to my country. When I think about the term “Leader” there is a moment I feel that what we can do as individuals might not have that much influence to the world. However, this conference made me realize that if we do not do anything or not try to understand others nothing will change. Whenever I am in the community of Sunwah Foundation, I feel that we, as a group of future leaders, do accept the difference of individual uniqueness and this is certainly a leap to the next generation instead of grouping up people in a category and see them through the lens of stereotypes. I am glad to be a member of this Foundation, making connections around the world will gradually break those lenses and eventually each one of us will spread a positive change to the society.